Camberwell Green Magistrates’ Court is closing at the end of December 2018.

The closure is nothing out of ordinary, it is in fact a typical example of current Ministry of Justice’s cost-saving exercise, where a number of courts nationwide are due to close in the near future and their workload is to be taken over by a neighbouring courts. In the case of Camberwell, Croydon Magistrates is to receive all its adult cases and Bromley is taking over the youth court cases.

Why does Camberwell Green’s closure matter to Polish community, you might rightly ask.

The answer is staring in the face of anybody who has ever visited the second floor of the Camberwell court. The second floor is where the bulk of cases are being heard. The floor accommodates four courtrooms, several consultation rooms, video link facility and the security guards desk. The whole length of one side of the second floor wall, is adorned by an imposing looking green relief by Tadeusz Adam Zieliński. It really is a striking work of art.

It stretches just under 100 metres long and some 5 metres tall.

It consists of two parts, separated by the main entrance to the floor, which depict what looks like the same scene. Unfortunately I am not sure what the title of the artwork is.

The court is open to the public Monday to Friday from 9am till 5pm, and on Saturday from 9am till 1pm. There are no restrictions on who can visit. If you are nearby, I would suggest that you come in and have a look for yourself.

Please also refer to the photos for a better idea of the scale and look and feel of the piece.

Tadeusz Adam Zieliński (1907-1993) was a soldier in general Anders army, as well as a sculptor and painterHis work is displayed in many places around the world, for example in Jerusalem, London (notably Andrzej Bobola church, Lambeth Palace Crypt Chapel, South Norwood Polish chapel, tombstones in Brompton Cemetery, and several other London cemeteries), Polish Millenium House in Birmingham and Carfin near Glasgow.

An abbreviated version of the biography translated into English will be available here shortly. 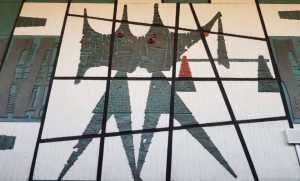 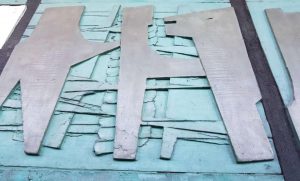 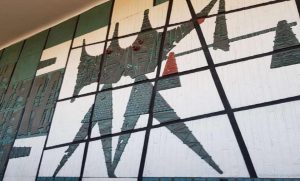 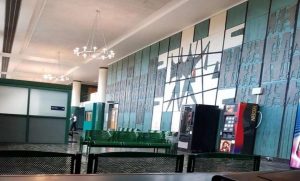 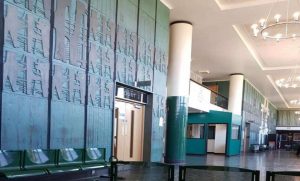 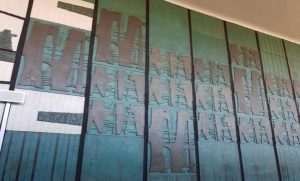 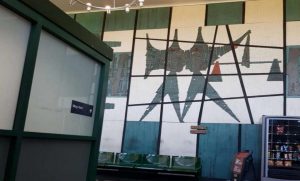 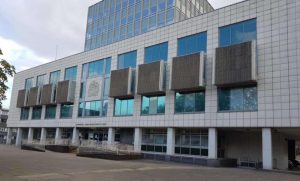 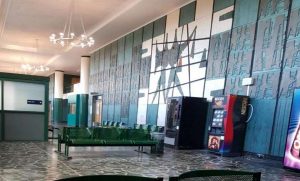 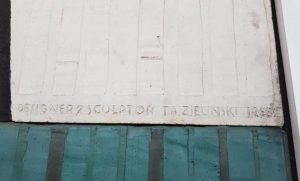 During WWII Tadeusz Adam Zielinski, second lieutenant of the reserve, was a prisoner of war at Kozielsk II camp, where he made a wood relief of Our Lady of Kozielsk, which was later on used on an altar during Polish Army Holy Mass celebrations.

On release of Polish prisoners of war from Kozielsk II, Zieliński joined General Anders army and travelled with the army through Iran, Iraq, Palestine and Italy. After the battle of Monte Cassino, the relief was renamed as Our Victorious Lady of Kozielsk.

The relief is currently on display at Andrzej Bobola church in Hammersmith, London.

Zieliński left Palestine in 1948 and moved to Britain, initially to a military camp in Scotland and later on to London. Over the next few decades he took active part in cultural, artistic and intellectual life of Polish London community. His work was displayed in numerous art galleries and exhibitions in London and other towns all over Britain.

His religiously-themed sculptures are scattered around many churches, chapels and cemeteries in Britain.
Zieliński worked mainly in wood, but he experimented with other materials also, such as metal, stone, and refined concrete. He considered the latter to be an interesting medium, but also difficult and troublesome to work with.

Zieliński was one of the few London base Polish artists of his generation fortunate enough to have his work commissioned by a range of clients.

Little is known about how it came about that Zieliński’s imposing stone relief work ended up on the walls of the court in Camberwell. What we do know is that it was designed and made in 1968, possibly commissioned.

Another thing which remains unclear at this stage is what lays in store for the Camberwell court building once it closes its doors to justice.

Local rumour has it that the building in its present form, which court staff are quick to describe as unfit for purpose, might be demolished and give way to a block of flats, which makes sense as this seems to be the current trend.

All this brings me to the crux of the matter. It would be a real shame if Zieliński’s relief were to perish in the rubble with the rest of building.

I believe that Polish community in the UK and possibly Polish cultural heritage organisations in Poland should at least attempt to save his work, rescue it from the court wall, and relocate it to a more appropriate setting, where it could receive the recognition it deserves.

Please get in touch if you would like to get involved in any way, or if you would just like to share thoughts and ideas on the subject.